I haven’t been playing Magic: the Gathering as much since I started tackling my debt in earnest. Tabletop gaming superhero Wil Wheaton once said that he does not promote MtG because it revolves around a pay-to-play mechanic, and while I deeply love the game it is really hard to get around how much it can cost to keep up with the game. The perfect median is when you have friends with a bunch of Magic cards who really enjoy playing Commander/EDH (Elder Dragon Highlander) format. Commander is a casual format where players can construct their own decks around a legendary creature of their choice or choose to buy a pre-made deck. The decks themselves are more expensive than many other starter decks (as they used to call them), intro packs, or deckbuilder kits, but because you can only play one of every non-land card there are many more combinations which make each deck infinitely more playable. My friend Jordan recently purchased all five of the Commander 2015 pre-made decks — Call the Spirits, Seize Control, Plunder the Graves, Wade Into Battle, and Swell the Host — which revolve around a new experience counter mechanic and for his birthday he wanted to have a 5-player free-for-all involving all five decks. I thought I would do a write-up about the five decks and my experiences with them thus far.

Call the Spirits is an Orzhov (white/black) deck featuring Daxos the Returned as its general. You gain an experience counter each time you cast an enchantment. Daxos has the ability to create spirit tokens for 1WB with power and toughness equal to the amount of experience counters you have accumulated. With enough mana, Daxos can turn into a creature factory, but in my experience the deck never gained any momentum. I only played two games with these five decks, but Call the Spirits definitely came off as one of the weakest decks in the bunch.

Seize Control is an Izzet (blue/red) deck featuring Mizzix of the Izmagnus as its general. If you cast an instant or sorcery with a converted mana cost (CMC) greater than the amount of experience you have, you gain an experience counter. Each subsequent instant/sorcery that you cast from that point on will cost 1 less colorless mana for each experience counter you have. During early deck discussion, many of us overlooked Seize Control, mainly because I play with a lot of people who really don’t like messing with blue. You spend so much time leaving mana open and hoping you can use it that it is often not worth it. After seeing this deck in action, it became a clear contender for best deck in the set. I won using Seize Control during the first match, and I got second place in the second match, defeated by — you guessed it — Seize Control. It is fairly easy to cast spells with CMC 1, 2, 3, 4, etc., in a sequence to maximize Mizzix’s value, especially with so many cards that have a Flashback cost, making it easy to get ahead and stay ahead. Usually, you’re going to win by stealing someone else’s best creature — often their general — but exercise with care. You can put a target on your back pretty easily that way. 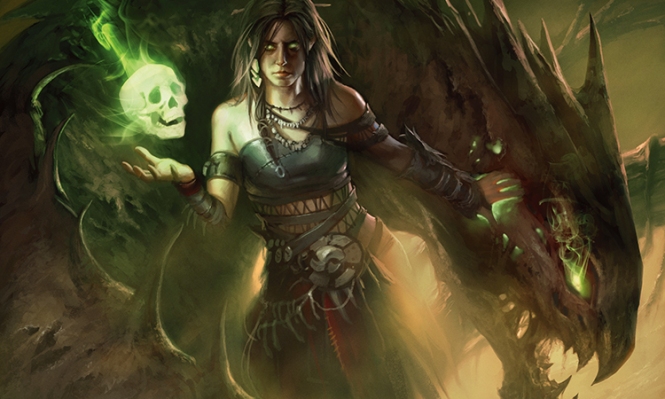 Plunder the Graves is a Golgari (black/green) deck featuring Meren of Clan Nel Toth as its general. Whenever a creature you control dies, you gain an experience counter. When your end step comes around, you can choose a creature from your graveyard and if its CMC is less than or equal to your experience you can return it to the battlefield. Otherwise, you can return this creature to your hand. There are certainly some fun things you can do with this deck, and before we started playing I thought it was probably one of the best, but this is another deck that seemed kind of difficult to actually get going.

Wade Into Battle is a Boros (white/red) deck featuring Kalemne, Disciple of Iroas as its general. You get experience counters by casting creatures with CMC five or more, and Kalemne gets +1/+1 for each experience counter. Boros is probably my favorite two-color combination because of its speed and relentlessness, and the mana ramp in this deck is formidable enough to get those big creatures out quickly. On my first turn with this deck I played a Plains, tapped the Plains to cast Sol Ring, and finally tapped the Sol Ring to cast Fellwar Stone. When I played my second Plains on turn two, I already had five mana available. With ramp like this you can cast Kalemne on turn two and your first giant creature on turn three. The big danger is that you become an early target for Seize Control’s dominate spells, and that is why I think Wade Into Battle is probably the second best deck of the batch.

Swell the Host is a Simic (blue/green) deck featuring Ezuri, Claw of Progress as its general. Whenever you cast a creature with power 2 or less, you get an experience counter. When your combat phase begins, you get to put a +1/+1 counter on another target creature you control for each experience counter you have accumulated. While this deck wasn’t the most powerful on its own, it was certainly the most fun to interact with. There were multiple times when the person playing Call the Spirits would cast Thief of Blood and steal all of the counters from the creature. In fact, when I was playing with the Wade Into Battle deck there was a time where I was the only person of all five of us who had never possessed the massive creature created by Ezuri, Claw of Progress and Thief of Blood. If you want to win, Swell the Host might not be the best deck to play with, make sure this deck is in the mix.

I’m rarely excited about Wizards’ pre-made Commander decks and then I try them out and fall in love with basically all of them (to varying degrees). One of the only problems I’ve had with the last couple of sets is that there isn’t as much room to play with the new mechanics. For example, in a previous set of decks we were introduced to the concept of Lieutenants, cards that help you out assuming that your Commander is on the battlefield. To my knowledge, there are only five Lieutenants in existence at this time, one for each of the five pre-made decks. Similarly, it would be really neat to find some more cards that interact with experience counters. I doubt any of these cards are going to come out of a standard set in the near future, but I think it might be really neat to roll out some sort of Conspiracy-esque draft-centered set that feeds into the existing Commander product of the last couple of years. In my opinion, when you release a new game mechanic you need to provide resources for deckbuilders so that they don’t have to be limited by the cards and color combinations of the pre-made decks. That said, I can imagine playing with these decks once a week and not really getting tired of them for at least a year, and from a marketing standpoint I think that is what Wizards is aiming for. If you get bored after a year, there’s going to be another set of decks to delve into.

One thought on “Commander 2015: My First Thoughts”