We departed Ohakune (Mordor) for a lengthy 4 hour drive down Highway 1 to New Zealand’s capital city of Wellington.   We took our first stop to catch a glimpse of the mighty Anduin (The Great River), which was partially filmed within the steep gorges of the Rangitikei River.  For the non-geeks, The Anduin is the river the fellowship used after departing the Elven tree-city of Lothlorien in Fellowship of the Ring.  Using my LOTR film location guidebook, we followed signs for “Mokai Gravity Canyon”- New Zealand’s tallest bridge bungee jump.  We figured it would be an innocent 15-20 min detour but it ended up taking about 45 minutes to navigate the winding roads deep into the rocky valley ahead.  The view was well worth the trip however. 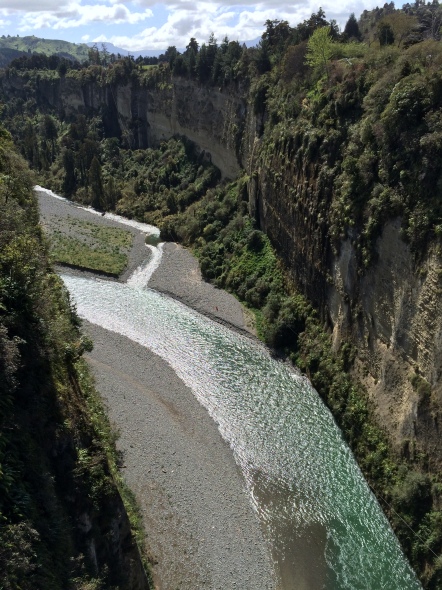 We continued south and set our sights on exploring the Waitarere Forest on the western Kapiti coast.  It was here that they filmed the Trollshaw Forest where the Aragorn escorted the hobbits on their way to Rivendell in Fellowship (and also the location of Bilbo’s petrified Trolls in The Hobbit).  We arrived in the small beach-town of Waitarere and had lunch at a nearby café where I had some really great fish and chips.  We managed to find the entrance to the nearby forest but much to my dismay, it was gated off with a “no trespassing” sign- probably to ward off LOTR film-site hunters just like myself.  How lame!  I badly wanted to sneak in but my inner child was kept at bay when Sarah managed to talk me out of it.  We got back on Highway 1 and enjoyed glorious sunset drive along the dry cliffs of the Tasman coast which evoked a kind of California Highway 101 feel.

Wellington is New Zealand’s capital and is situated at the very southern tip of the North Island along the massive Fitzroy Bay.  The greater landscape is markedly more arid and brown with large rolling hills and actually looked a lot like San Francisco.  The California-esque landscape is particularly fitting because Wellington-often referred to as “Wellywood”- is the heart of New Zealand’s film industry.  The next morning we took a guided tour through Peter Jackson’s “private” Hollywood in the nearby district of Miramar.  At this point I’m pretty sure Wellington has some kind of California wannabe complex going on. 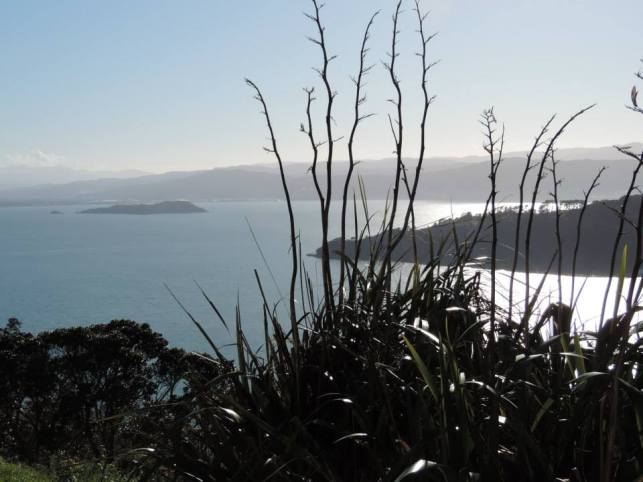 Wellington, city by the bay

Our first stop was at Weta Workshop.  This is the place that fashions props for Peter Jackson films and also many non-Jackson films such as Avatar, The Chronicles of Narnia, Van Helsing, and Kingdom of Heaven.  We took a tour of the workshop but were banned from taking any pictures due to copyright and film secrecy reasons.  But what was inside was a fascinating array of first-hand props, many of which were actually used in the the Lord of the Rings movies.    On the tour I learned a lot of interesting facts such as that Sauron was mostly filmed using a live actor in an actual costume (which was surprisingly smaller than you’d imagine) and that the “chainmail” used was actually made from lightweight PVC piping to keep the actors comfortable.  The coolest thing was that all the weapons used in the films were hand made  by local blacksmiths hired to work for Weta.  On the tour you could actually peer into the individual metalworking studios used by the local artisans.  The part in Return of the King where the elves of Rivendell forge Aragorn’s new sword, Anduril, with hammers and anvils wasn’t too far off from how it was actually made.  (And yes, I do know Anduril was actually forged in “Fellowship of the Ring” according to the books)… 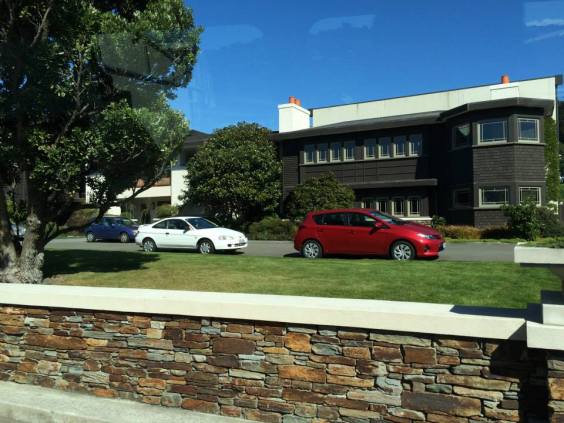 On a sidenote, our tour guide told us a story about how Viggo Mortinsen, ever the method actor, was arrested in downtown Wellington for walking around in costume wielding his pre-Anduril broadsword.  Keep in mind this was before the film’s release so no one had a clue what was going on.  The cops, assuming he was some mad vagrant, apprehended him with a straight face saying the words “sir, please lay down your sword”.  How Viggo thought no one would call him out wearing his scrappy ranger costume in broad Wellington daylight is anyone’s guess, but major props to the dude for dedication. 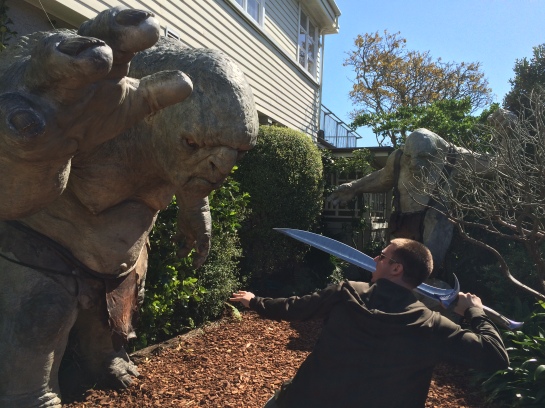 Having a man-child moment with Thorin’s sword, Ocrist

After departing Weta Workshop we explored the nearby park where they filmed the Black Rider (Nazgul) encounter with the Hobbits in Fellowship of the Ring.  It was filmed in a public biking trail shrouded in a surprisingly small woodland area atop Mt. Victoria, which was more of a big hill than an actual mountain.     We walked the exact same trail they used when they filmed in the scene where Frodo says “get off the road!” 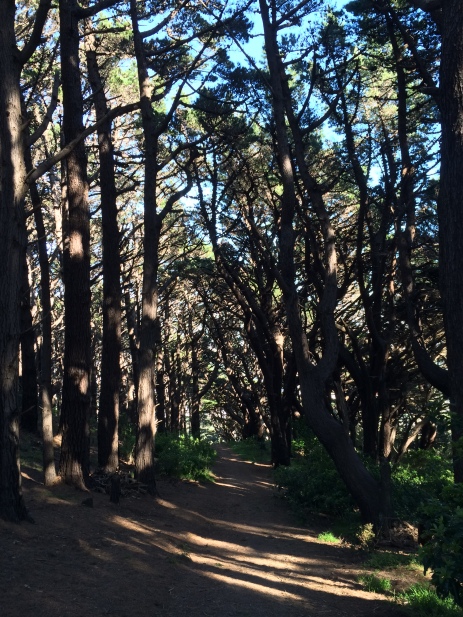 Can you hear the Nazgul shriek?

The little earthen alcove the hobbits used to hide from the Black Riders is still there- but a good eye will notice that the giant tree stump is missing.  It was actually just fake prop they imported from Weta Workshop down the street. 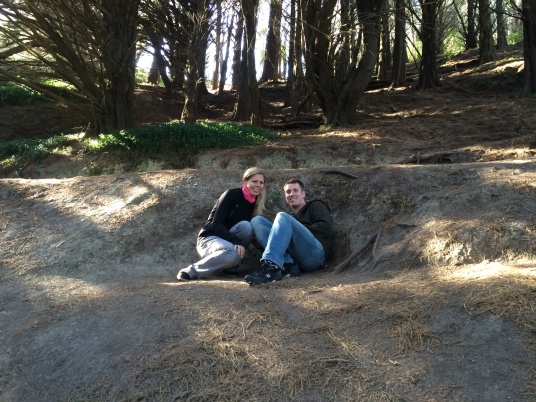 They also filmed the Hobbits tumbling down the hill from farmer Maggot’s crop, which of course, I had to lamely re-enact. 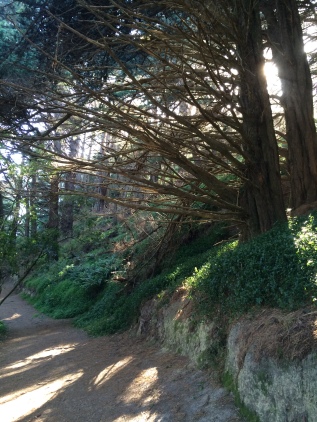 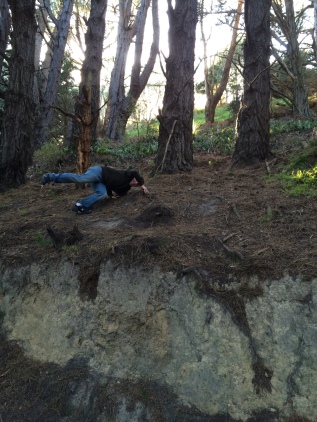 When I was done nerding out to Hobbit-Nazgul chase we grabbed lunch and drove out for an afternoon trip to the Hutt Valley- a northern suburb of the city where they filmed more of the Anduin, Aragorn’s river rescue, and the gardens of Isengard .  The highway paralleled the Hutt River which eventually took us to another Anduin film scene location as pinpointed by my film site guidebook. 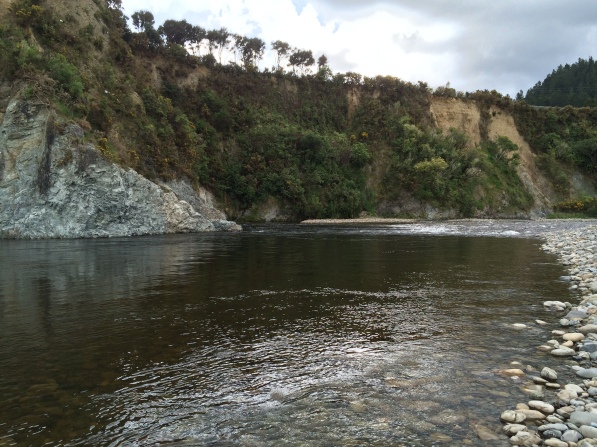 More of “The Anduin”, filmed on the Hutt River

Our next two locations were a true hunt to find however as the guidebook offered vague directions made more complicated by our subpar GPS.  We meandered through a big middle class neighborhood to find where the horse Brego rescues the befallen Aragorn after taking a “tumble off the cliff” in The Two Towers.  It was an overcast day and the sun had just started to melt through the clouds casting a heavenly glint along the river rocks. 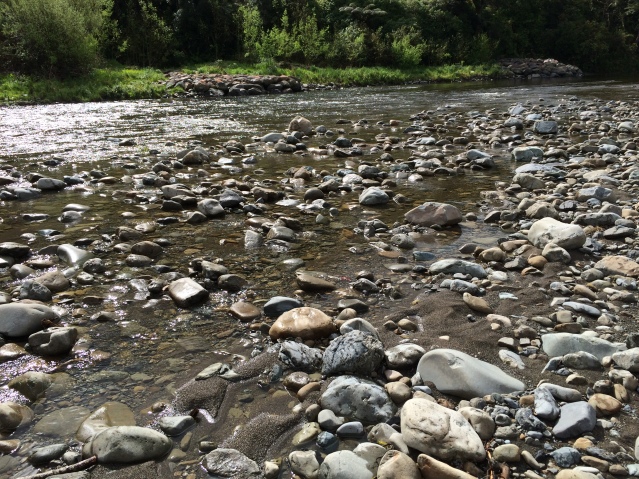 Who wouldn’t want to wash up here half dead?

We then turned down the street to hunt for the nearby Harcourt Park where Gandalf walked with Saruman in the gardens of Isengard.  They also filmed Saruman’s orcs cutting down the trees around Orthanc and Fangorn Forest in The Two Towers.  The irony made me laugh when I discovered Sarumon’s evil hideout was nothing more than an innocent disc-golf park in New Zealand suburbia. 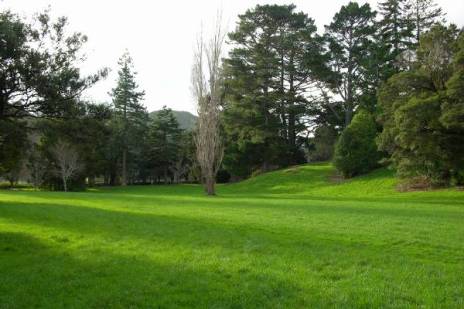 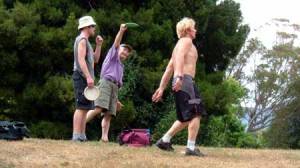 The gardens of Isengard (yes really)

The first half of our road trip was now over, and I returned our faithful red Toyota Camry to Thrifty the next morning.  Today we departed Wellington by ferry and sailed 3 hours through Cook Strait towards the South Island.

We disembarked the ferry in the small fishing town of Picton, nestled in a beautiful little pocket of tall sloping hills riddled with evergreens.  We were going south, but the temperature was getting colder as we strayed further from the equator.  We picked up our new rental car, another Toyota Camry, and made our way south to the distant city of Christchurch.  Our travel itinerary had us spend the night in the gorgeous coastal whaling town of Kaikoura, which was actually our favorite town on the trip.  Here we caught our first glimpse of the mighty snowcapped mountain ranges bisecting the South Island from north to south.  These were the beginning of the Misty Mountains. Sarah and I of course commemorated this milestone by blasting the Led Zeppelin song of the same name from Led Zeppelin IV.  Growing up I had always associated “Misty Mountain Hop” with driving on the Brooklyn Bridge to New York city with Jimmy Fallon yapping at me as seen in the Cameron Crowe movie Almost Famous– but today that memory would change. 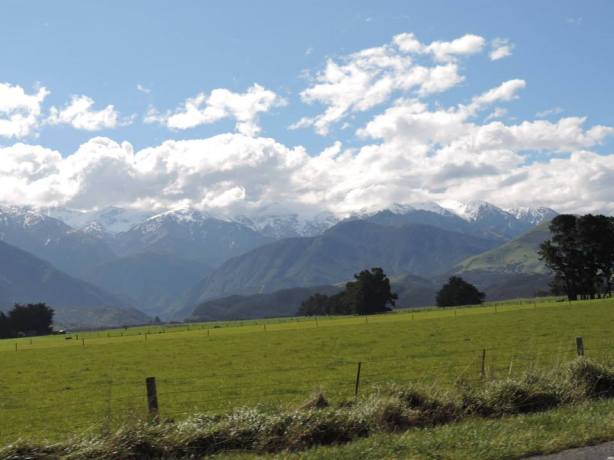 The Southern Alps have a significant effect on the South Island weather patterns. The prevailing westerly winds create a region of lush, cool, greenery and rainfall on the western half while leaving the east coast hot and dry.  It is this weather phenomenon that is responsible for the iconic brown tussock-filled landscape of Rohan, also known as the Riddermark.  This was the Beowulf-themed realm of the horse lords and the beleaguered King Theoden from The Two Towers.

When arrived in Christchurch to find a city devastated by a long and unusual series of earthquakes between 2010 and 2012, 4,558 earthquakes to be exact.  The city was a humbling landscape of futuristic new buildings spread among ruins, cranes and renovations.  It was eerily quiet, lifeless and devoid of people.  It felt like a warzone.  Not to diminish the city’s struggle, but my reaction upon arriving in Christchurch perfectly matched Gimli’s in Edoras – “you’d find more cheer in a graveyard”. 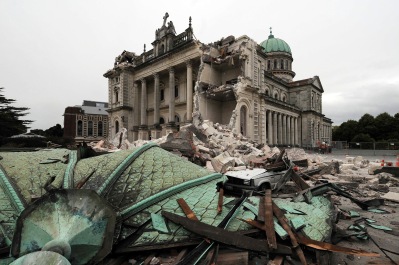 The hotel we stayed in was actually extremely nice (at least compared to the run of motels we’d just had).  It was brand new and still had that stale new-construction smell.  We looked up restaurants online and discovered a newly renovated district to eat in.  The new locale felt modern and comfortable- a far cry from the ruins only minutes away.  This was but one example of the city using the devastation to improve itself.  Christchurch was in the midst of a bold reconstruction program which aimed to rebuild it as a “city of the future”.  It was going to be greener and more energy efficient.  It sought to modernize its public transportation and infrastructure.  The plan called for a futuristic zoning concept of re-arranging the city into individual districts of the arts, government, business and recreation. 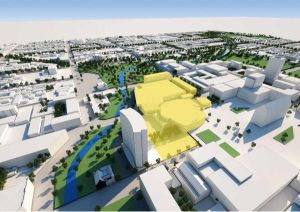 The devastation, and rebirth of the city became more apparent the next day when we drove through the city on our day-long trip inland to the Canterbury countryside – the filming locale for Rohan.  We drove in a large, rugged ATV that was necessary to negotiate the rough unpaved road that took us to Mt. Sunday where they built and filmed Rohan’s capital of Edoras.  The dry, brown mountainous expanse was unmistakably Rohan. 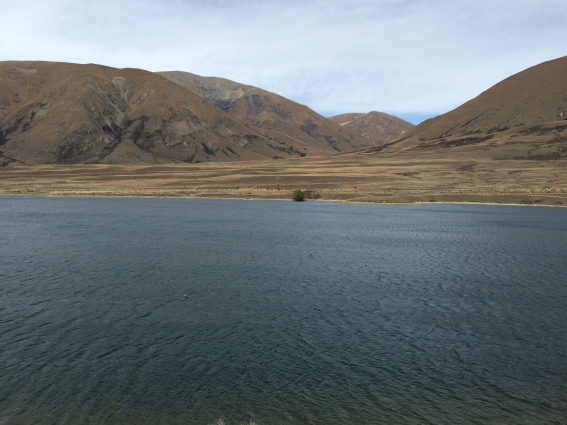 Welcome to “The Riddermark”

Our ATV crawled its way a few miles off road through streams and rock as we made our way to the base of Mt. Sunday.  The entire valley was a giant wind tunnel, and we battled 50 mph winds as we hiked to the top.  The Edoras set was built by hand, leaving very little to CGI.  To think that the film crew built such a giant set in violent winds was totally mind blowing (no pun intended).  It was also much smaller than it appears in the film. 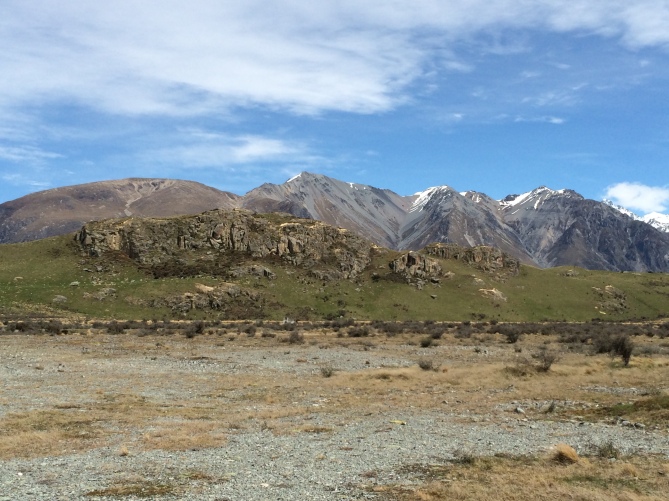 Mt. Sunday, aka “Edoras” and “The Golden Hall”

The view from the top was easily the grandest, most epic scenery of the entire trip.  Mt. Sunday was perfectly situated in the middle of a vast valley expanse carved by the Rangitata River.  Looking northeast you could see the massive river delta that served as Helm’s Deep from The Two Towers. 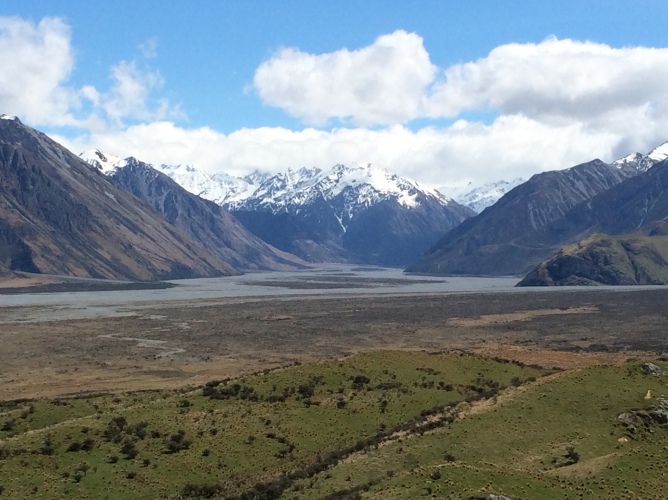 The awesome, untamed grandeur of the Canterbury region is beyond description so I’ll let the visuals do the rest of the talking.  In Part 3 our trip comes to an end in Twizel, Queenstown, and Milford Sound.  Here we’ll explore Gondor, Fangorn Forest, The Pillars of the Kings, Lothlorien, and Amon Hen. 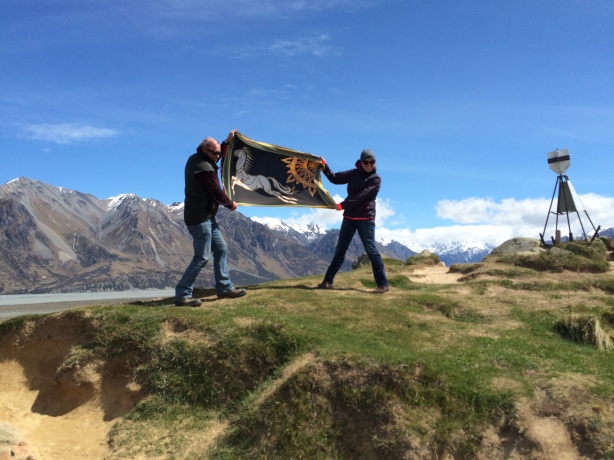 From the top of “Edoras” (Mt. Sunday) 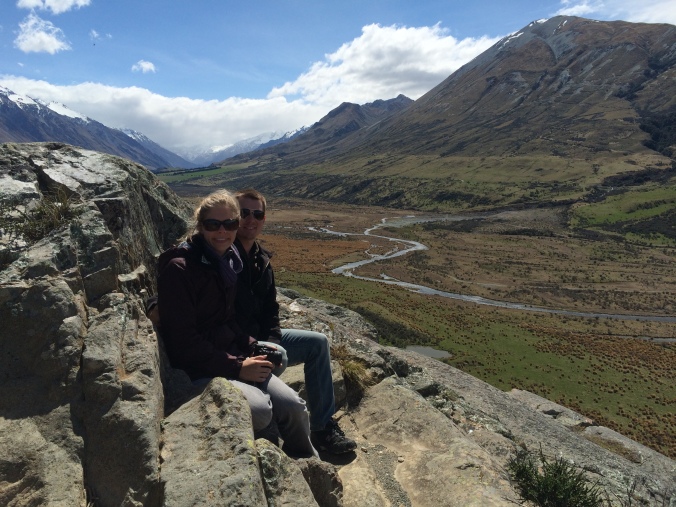