As I was writing this week’s post, I started noticing that I was saying the same thing as I have for the last couple of months about the same comics, talking about how great Constantine – The Hellblazer, Extraordinary X-Men, Huck, and The Walking Dead are, and I started getting bored with my comic book posts. Here are just a few snippets from my first draft of this week’s post: “I am going to sound like a broken record,” “yet another fantastic issue,” “keep delivering the same script,” “you’re not going to be surprised,” “impeach me if the content is getting repetitive,” and “it is a bad week for me coming up with original stuff.” Yeah. It was time for a change.

If you’ve been following the comic posts for the whole time, I started doing spoiler-free and spoiler-rich descriptions of comics that I would give a four or five star rating to. At the beginning of this year, after writing about the best new comics of 2015, I started taking note of all of the new issues released each week as well. I’ve also been playing with reviewing older comics that I have overlooked in my conclusion. What I’m going to try out this week is dividing the posts into two sections, one for This Week’s Comics where I will say something about all of the new comics, all of the best comics, and any other comics that seem worthy of further discussion, and another that I’m going to call Book Club where we talk about some older series like my current read-through of Civil War.

It was a choice of either abandoning the comic reviews or changing. I decided to change. Let me know what you think.

NOTE: The Legend of Wonder Woman #1 was released in print this week, but the original digital edition came out on November 12, 2015 so I didn’t include it in the list.

The Marvel Cinematic Universe has expanded significantly now that there is an in-continuity ongoing comic series featuring everyone’s favorite Agents of SHIELD.

There is no doubt in my mind that Constantine – The Hellblazer is probably going to be the most overlooked book DC publishes for the entire time this creative team is active. As a resutl, there are two benefits to putting this series on your pull list: 1. if you buy this comic that means it is less likely to get cancelled, and 2. in a couple of years when the rest of the world catches up to how awesome this book is your copies will likely go up in value.

Does anyone know if the events surrounding Scott Summers’ “death” happened in some other comic? Or is this something that we’re going to learn more about as this comic goes on?

Also, for some reason, this issue got me thinking about Illyana Rasputin’s original situation where she aged from a child to a teenager in Limbo. Would anyone else be interested with further stories where Illyana’s age keeps changing for whatever reason? Personally, I would love to see an Illyana who is at least a decade older than Colossus. I think a good writer like Jeff Lemire could have a lot of fun with an idea like this.

Following the events of Green Lantern: Lost Army, Green Lantern Corps: Edge of Oblivion #1 follows a fractured Green Lantern Corps stranded in a previous version of the DC Universe as they try to get back home. I’m not sure how they got there and I sure as heck don’t know how they’re going to get out of it, but it sure sounds like a sticky situation to me.

Bonus: It looks like Mogo, the living planet and the largest member of the Corps, is going to be featured heavily in this book.

Gutter Magic #1 takes place in New York City in a universe where World War II was fought with magic instead of munitions. I’ve always been interested in stories where strange things happened in the past and the entire world is changed because of it. It gives you the sense that anything can be thought of as normal, like your dreams can come true and within a year you’ll be bored with them.

I’m not ready for this mini-series to conclude in three issues.

Does anyone have any feelings about Huck’s family? In particular, I no longer think that his brother is going to be a bad guy. That said, a brother with good intentions might just pull Huck into a world of trouble.

Writer Gail Simone (of Batgirl fame) used Kickstarter funds to create an 80-page original graphic novel called Leaving Megalopolis where all of the city’s superheroes are turned into homicidal maniacs. InLeaving Megalopolis: Surviving Megalopolis #1 we are thrown right back into that whole Megalopolis scene and it is not pretty. Simone is one of those creators who is big enough to be a household name but small enough that she is still connected to her fan base, so it always feels good to support a book that she is working on. 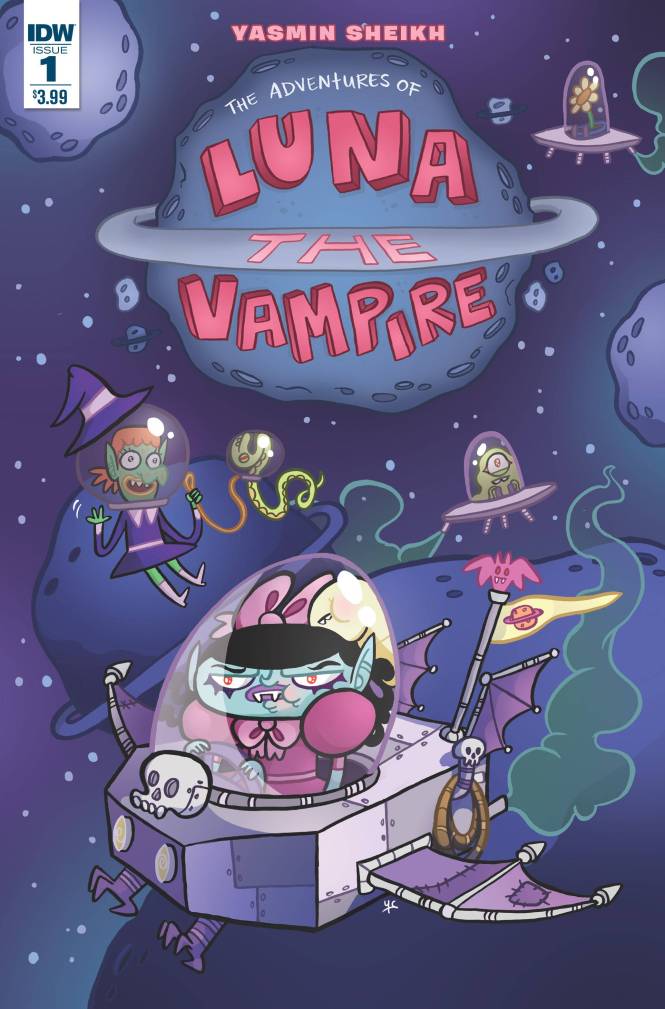 I’ll be honest. Space is not populated by enough fantasy and horror creatures. I mean, vampires don’t need to breathe, so why not spend some time in space.

One of my favorite literary references is a scene in Fyodor Dostoyevksy’s The Brothers Karamazov where a character describes spending a million or so years trying to get into heaven and the toil is unbearable, but after one moment in heaven it was worth every step. When I first read this passage, I found it a great way to describe Dostoyevsky. He writes in a very dense, very Russian fashion, and sometimes it can be really tough to get through a portion of one of his books, but then you read one sentence that makes it completely worth it. In case you hadn’t guessed already, Secret Wars #9 is so good, it was worth all of the weird stuff leading up to it, all of the confusion in the comics taking place afterwards, and all of the failed crossovers that came before. Does anyone know if this is Jonathan Hickman’s last book for Marvel? It certainly has the stink of finality to it, kind of like Geoff Johns’ last issue of Green Lantern. So good — I take everything negative back.

Some people are suggesting that Robert Kirkman is going to end The Walking Dead at issue #300, which, if true, makes this the half-way point for the series. Does that change your perspective of this milestone issue? Do you think there’s going to be a different tone for the rest of the series? Personally, I think Rick is going to have to save himself and his friends from the machinations he put into effect in this issue.

Bonus Question: Do you think it would be a happy ending or a tragic ending if the world of The Walking Dead turned into our current world? Sure, there wouldn’t be zombies anymore, but there would be government corruption and massive wars and economic inequality… Is this what we want for Rick and company?

What I knew about Civil War prior to actually reading it was that it was a stand-off between Captain America and Iron Man that involved basically the entire Marvel Universe and affected stories for years afterwards. (There is also that tragedy that I know about at the end of the saga that I don’t want to actually address until I get to it in the comics. I want to at least pretend that I’m going to be surprised.) From actually reading the comics, it feels like Spider-man is actually the central character of the drama. My favorite issues have been Amazing Spider-man #529-532 (issue #532 actually made me cry) and Civil War #1. I suppose I shouldn’t be surprised that the character most affected by the registration of identities would be Peter Parker/Spider-man, especially because identity has probably been a more central issue for him than any other superhero in the Marvel universe. This being the case, Iron Man and Captain America represent the poles of possible responses to the Superhuman Registration Act and Spider-man becomes the every man, the lithmus test, the zeitgeist, and the soul of the Marvel Universe. Interestingly enough, the cover of Civil War #2 shows half of Spider-man on Tony’s side and half on Steve’s side.

The second topic that pops out is that Civil War is a really bold series that attempts to place the Marvel universe smack dab in the center of our universe. We are not dealing with space invaders or creatures from dimension X. We are dealing with issues that remind us of Guantanimo Bay, the Patriot Act, and building a wall between the US and Mexico. In the Frontline issues we see the perspective from reporters and the American public. While we do not have superheroes in our current reality, it feels like Marvel is trying to tell us that the issues that Civil War is dealing with resonate with issues America has faced in its past, issues it is currently facing, and issues it will face in the future. Decisions feel like they’re going to get harder and harder at this point, but each and every one of them is going to define who our favorite characters really are.

How far are you in Marvel’s Civil War? Did you read it when it first came out? What revelations have you had while reading? Is there a specific issue that you’d like to talk about more in-depth?