Don’t tell me truth hurts, little girl
‘Cause it hurts like hell

Do you remember the words to the songs your parents would sing to you to put you to sleep, the various lullabies of your early youth? The Tiemeyer boys sure do. Well, at least one of them… It went something like this:

I’ve brought this up with a decent amount of my friends, but my brother and I legitimately thought David Bowie’s “Starman” was a bedtime lullaby. We knew the song by heart before we’d ever heard the actual song, simply because that was what dad sang to us as we were rocked in his arms. I spent the first half of my life rebelling against my dad’s favorite bands — David Bowie and The Rolling Stones most of all  — but now David Bowie is dead and I’m left with regret that I didn’t begin paying my respect sooner. 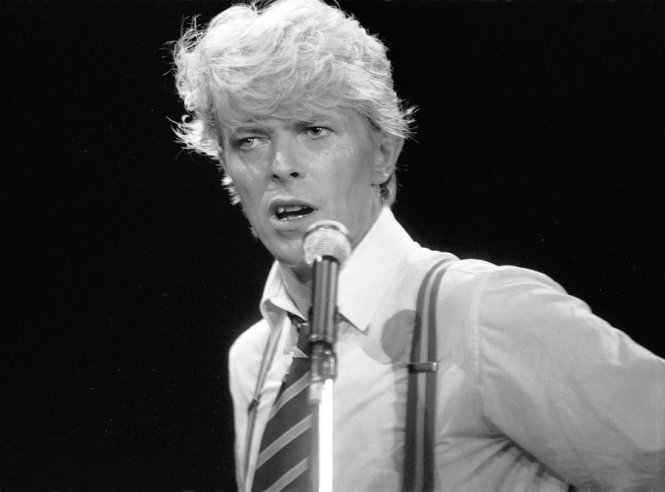 At first, I thought the posts about Bowie’s passing might be just another one of those celebrity death hoaxes like what happened with Jeff Goldblum, Mark McGrath, and Cher, but the story checked out this time. Once I found out that this was the real deal — that David Bowie was really gone — I honestly didn’t know what to do or say, so I broke it down into a to-do list in my mind: call dad at some point today, remove “[ ] See David Bowie live” from the bucket list, figure out something to say about his death… My wife later told me that she cried on the bus to school when she found out. Some girl tried to talk to her and she nearly shouted, “Your generation doesn’t even know what you just lost.” When she asked how I was doing, I told her it felt like a death in the family. In one way or another, David Bowie has always been with me, so I opened up a blank WordPress window and started writing anecdotes about the years I’ve spent with Bowie. 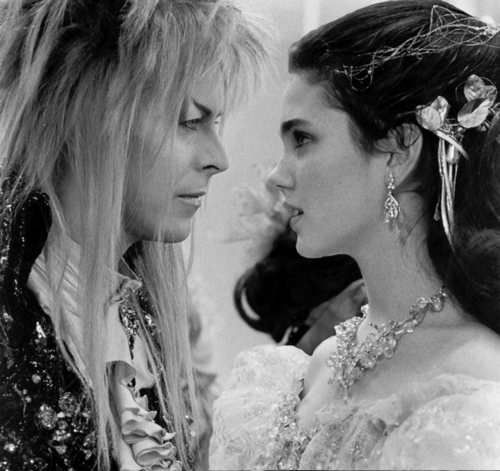 When my brother and I were young, we would spend the afternoons at our aunt’s house while both of our parents worked. There were a lot of perks about Aunt Sue’s house. She had a swimming pool, a clipboard and lots of blank paper to draw or write on, and she had all of the premium channels that we didn’t subscribe to at home. One afternoon I flipped over to HBO where some strange puppet/song-and-dance film was playing and I couldn’t take my eyes away. The strange part was that I felt as if I’d watched this film before, with the puzzles and the strange characters. When I saw the little baby crawling on the ceiling, I knew this film was the source of some recurring childhood nightmares.

That evening I boldly confronted my parents. “I saw this movie starring David Bowie and a bunch of Muppets at Aunt Sue’s today. It was called Labyrinth and I swear I’ve seen it before. I remember the baby on the ceiling from my dreams.”

My dad explained that he’d taken me to see Labyrinth when I was three years old, just four months after my younger brother Micah was born. We had gone to this strange theater on 29th street called the Quad 6 because my dad wasn’t going to miss David Bowie’s new movie and when you have both a baby and a little guy in your life you don’t get to sneak out without taking at least one of them with you. It wasn’t my first movie in theaters. I’d seen The Care Bears Movie and Sesame Street Presents Follow that Bird the year before. Labyrinth had certainly stuck with me in a jarring way, but because my dad took me to see the film at such an early age I was better prepared than anyone else when hipsters brought the magnifying glass to David Bowie’s funk opera in the early 2000s.

When I was a child, Labyrinth was the stuff of nightmares, but as a teenager I’d come to terms with the film enough that I could pop it on every day after school if I wanted and even go to sleep with it running in the background.

For a year I lived with my brother Micah and a guy named Travis on the Northern border of the University of North Texas campus no more than a block away from the DFW’s emerging party Mecca on Fry Street in Denton, Texas. Travis was a musician, photographer, and band promoter, and it was not uncommon for me to come home from work at Chicken Express and find our top-floor apartment filled with people and beer. I was in my mid-twenties with two degrees and I was finally having a traditional college experience.

The centerpiece of our apartment was a formidable wooden plank placed over our entryway at waist-level that we used as a beer pong table. Above it, on the wall, was a poster of David Bowie from the cover of Aladdin Sane. When we played beer pong we made use of what we called the Bowie Rule. If you bounced the ball off of Bowie’s face and it made it into your opponent’s cup, you would automatically win and the loser would have to drink all remaining cups of beer. 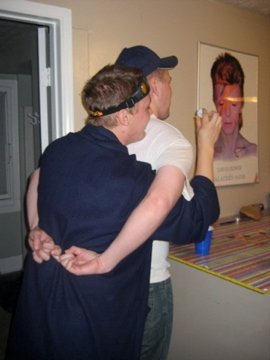 I knew most of my Texas friends were acquainted with our setup, but I had no idea how far the legend of Bowie Rules beer pong had gone until I was hanging out on Fry Street and overheard a group of complete strangers talking about how someone nearby had a beer pong table with a picture of David Bowie overlooking it. The stranger proceeded to explain how one could use Bowie for the sake of crushing ones beer pong adversaries as if it were some local legend and not some silly thing my brother and I had come up with a couple months earlier. In fact, I wouldn’t be surprised if someone in North Texas who either can’t remember or never learned my name, Micah’s name, or Travis’s name, saw the news about David Bowie’s death and immediately thought of Bowie Rules beer pong.

The year before I met my wife, I swear there wasn’t a day that went by where I didn’t listen to David Bowie’s album Hunky Dory. The album spoke of artists and poets as space aliens and mutants and expressed dissatisfaction at the ape-like behaviors of your ordinary, every day humans. One of my favorite moments took place about an hour outside of Roswell, New Mexico when the car I borrowed from my brother cast a long shadow on the desert sand and my buddy Stephan and I decided to play this album for our friends Adam and Tom for the first time.

When I met Amy, I welcomed a woman into my life who had more David Bowie records than I did. Preparing for our wedding, we had serious problems deciding whether Amy would use Bowie’s song “Kooks” for the father/daughter dance or if I would use it for the mother/son dance. Amy ended up winning, and watching her dance with her step dad Cliff was one of my favorite moments of our wedding. My own dad turned to me and gave me an exhilarated thumbs up when he heard the tune. 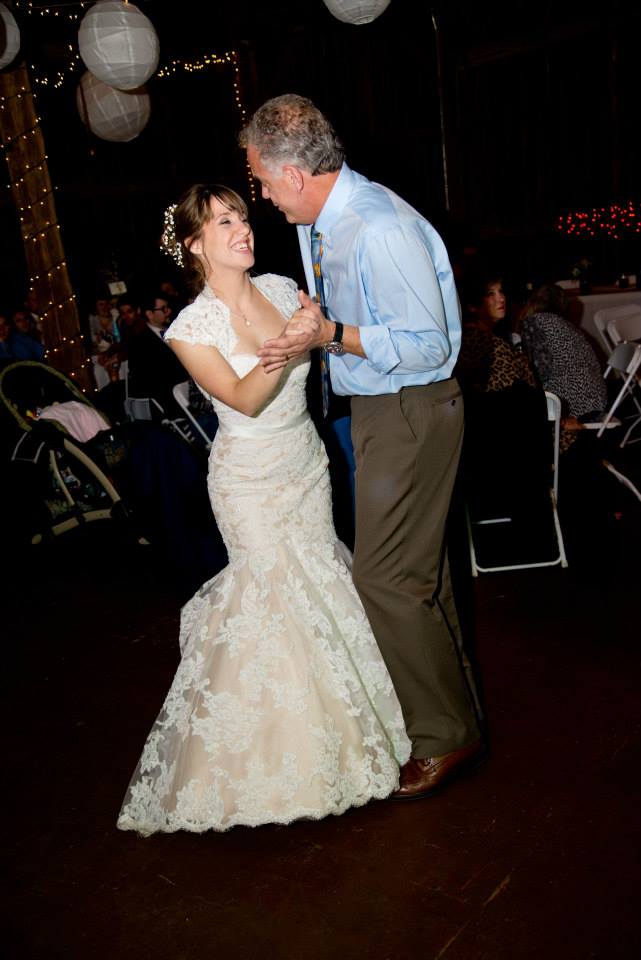 Despite the fact that our puppy has torn up nearly all of Amy’s undergarments, socks, and shoes in the eight months he’s been a part of our lives, I don’t think Amy was ever quite as sad as when Tiberius tore up her special edition vinyl copy of David Bowie narrating Peter and the Wolf. Of course, there is a kind of justice in the universe, because this past Christmas my dad went downstairs abruptly and came back with his original copy of the record. This is a record I’d heard my old man talk about nearly as often as he’d talked about how “uncanny” the resemblance was between Johnny Van Zant and deceased Lynyrd Skynyrd lead singer Ronnie Van Zant’s voices or how Mick Jagger was actually a shrewd businessman, and he’d decided he wanted Amy and I to have it.

Whenever a celebrity dies and people take to the web to express their sadness, there is inevitably going to be someone out there who shames fans because they’re not mourning a more appropriate tragedy like victims of some crisis overseas or a shooting on American soil. Forgive me for my language, but that is a crock of horse shit. Some of us can point to a song, a movie, or a book, and say, “That’s what got me through high school,” or “That’s the reason I didn’t kill myself in 1996.” Somebody had to go to a dark place him/herself in order to make that art and save your sorry ass from yourself. As for me, I can say that David Bowie is a part of some of my most fruitful relationships. My dad introduced Bowie to me before I was even capable of making memories and I heard him sing songs from Bowie’s vast library every day when he took his afternoon shower. My brother Micah was the one who kickstarted my own David Bowie odyssey and he even had a blog for a while called “Letters to Bowie” that, at the time, was my favorite thing on the Internet. I think my wife and I might have still gotten together in a world without Bowie, but we’d be missing some key memories.

David Bowie neither burned out nor faded away. He burned hotter and longer than anyone else I can think of and, like a bright, distant star, we’ll be feeling his influence for years to come. He died last night, on Sunday, January 10, 2016, two days after his 69th birthday and the release of his twenty-fifth studio album Blackstar and after an 18-month struggle with cancer.

I didn’t end up crying until I read Simon Pegg’s tweet about David Bowie’s death. You may want to grab a tissue before you scroll down any further. The following is a Tweet by Dean Podesta that was retweeted by, made popular by, and mis-credited to Simon Pegg.

If you're ever sad, just remember the world is 4.543 billion years old and you somehow managed to exist at the same time as David Bowie.

One thought on “It’s Only Forever: Making Peace with David Bowie’s Passing”