I think my favorite thing about writing these posts is getting to put up a picture of kittens on an underwear chair lift. If you can get past the cuteness, maybe you’ll find something to pique your interest below.

Dreaming of a Star Wars Christmas

At work I recently had the opportunity to use my down time designing Christmas-related scenes from each of the seven Star Wars movies. They feature snow people as the main characters and are even accompanied by cheesy catch phrases. As it turns out, our scenes won a contest and there are cookies and milk in my future as a prize. A co-worker offered to buy these drawings, but I told him to just take them for free. If you’re reading this, thank you for the ego boost.

As you can tell, many of the subtitles were pretty far on the cheesy side.

We were told that we couldn’t depict light sabers because they are too violent. Instead of replacing them with walkie talkies a la Spielberg, I decided to replace them with candy canes. 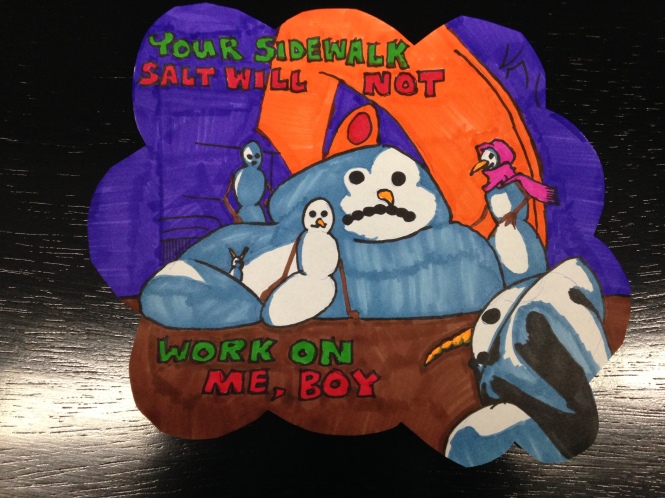 I was especially proud to depict the Twilek snowman with a scarf to represent the limp protrusions hanging from his head.

This was the picture where I ran out of orange marker. I would have to use highlighter for the later lava scene.

I tried not to think about the logical implication that niceness leads to the dark side. I was too busy being quippy and nostalgic.

Despite the fact that there are no violent light sabers in this scene, I thought for sure it would get torn down by leadership because I depicted with snowmen the most gruesome scene in Star Wars history. 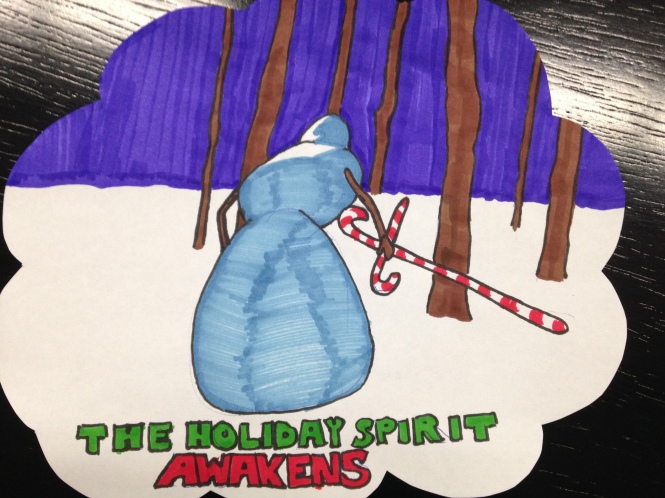 I hadn’t yet seen The Force Awakens when I drew this picture. You probably recognize this scene from the teaser trailer.

The Forest, starring Natalie Dormer of Game of Thrones fame, is only the most recent of series of films devoted to the Aokigahara forest at the base of Mount Fuji in Japan, a dense wilderness the locals refer to as “suicide forest” due to the astounding amount of suicide corpses that are found there each year. There was Forest of the Living Dead (or The Forest outside of the US) in 2010, Grave Halloween in 2013, and The Sea of Trees in 2015, but the film that really drew my attention is a short documentary filmed in 2010 titled Suicide Forest in Japan and published on YouTube by Vice.

The film follows a local man named Azusa Hayono who sweeps the forest to find the corpses of the deceased and perhaps to convince the still living to hang in there. It is not very long, but I expect it packs a bigger punch than any of the feature length fictional films about the forest. It is a little bit on the disturbing side, but definitely worth a watch.

Recovering alcoholics put time aside to celebrate each month and year without drink. In a debt-driven culture, I think maybe we ought to celebrate each outstanding debt that has been paid off or forgiven. While in college I accumulated more in debt than I would like to say. If you throw in the automobile loan we took out a couple years ago, you can get an idea of just how low I had sunk. Well, I hit a milestone the other day. It wasn’t easy, but I was able to pay off my second of four college loans, this one serviced by Wells Fargo. The first loan I paid off was a small loan with the University of Toledo which was serviced by ECSI. I was almost sad when I paid off this, my first student loan, not because I was going to miss being in debt — who could ever miss being in debt? — but because the people at ECSI were so amazingly intelligent and caring. It really felt like they were on my side rather than that of the institution I owed. Wells Fargo wasn’t unhelpful, but it is hard to look at an interest rate of nearly 8% without some of your happy thoughts running away. The remaining loans are my largest, a private consolidation loan that Discover bought from Citibank and a federal consolidation loan serviced by Great Lakes. Luckily the latter is in IBR.

If you have federal loans that are not in some form of income-contingent payment you should stop what you’re doing right now and call your loan servicer, especially if you work for the the government or a nonprofit like a hospital or social services. Depending on how much you owe, this decision could literally give you your life back. No lie.

The remaining portion of my journey is up hill, but right now I’m not thinking about that. Right now, I’m thinking of the fact that I am one step closer to being debt-free. I think I’m going to celebrate by not spending money and simply enjoying my time with my beautiful wife and my loving dog.

This doesn’t have to be all about me though. If you’ve recently paid off a debt, chime in. Let me know how it felt for you. This is the kind of joy that transfers from person to person, or at least it should be. What if we lived in a world without debt? Wouldn’t every sunrise feel different? Wouldn’t your pillow feel softer when you go to bed at the end of the day? We just got a step closer to that future. How can anyone contain themselves?!?!