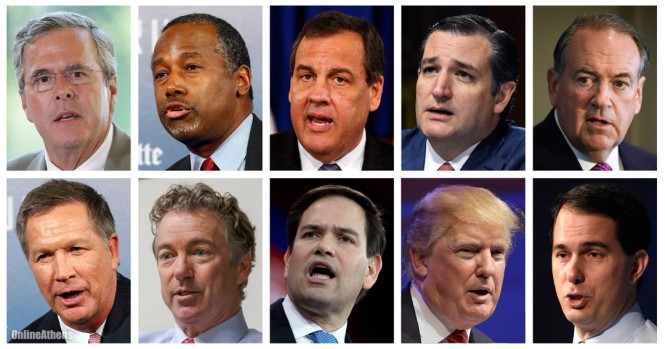 This is the condensed version. You should have seen how many showed up to the forum three days earlier.

I wrote about the Democratic Debate so, in a spirit of fairness, I will put down some words about the first Republican Debate. This is really against my best judgment because while everyone over on Team Democrat seemed concerned with student debt and crime on Wall Street, there were only two Republicans who even gave mouth service to these issues — Marco Rubio regarding student loan debt and Mike Huckabee regarding Wall Street — and those words were only said in passing. The debate began divisively with Donald Trump’s declaration that he will support nobody but himself in the general election, and the evening was peppered with ad hominem attacks and aggressive infighting. (It is worth noting that these attacks tapered near the end, perhaps due to some commercial break urging for the candidates to at least pretend that they can work together as a united party.) The loudest majority skirted the questions posed them, avoided policy altogether, and wasted our nation’s time and money by only speaking generally about truth, intelligence, Ronald Reagan, and the Christian faith.

A mentor of mine once said that if you want to calm down a group of teenagers and get something done, you have to remove the volatile elements one at a time until you reach a place of relative stability, and since I only discussed five Democrats I also thought it prudent to narrow the Republicans to the five most sensible candidates. Getting rid of Donald Trump, Ted Cruz, Chris Christie, Mike Huckabee and Scott Walker, that left us with the following five representatives of Republicans nationwide who might actually be able to keep this party together. Might.

Here’s a full video of the Debate. It has been up since August so maybe it won’t be taken down very quickly.

As always hit me up if the video link is down.

As with the Democratic Debate, it is always important to check the facts about what the candidates had to say. It just so happens that there were two volumes of corrections from FactCheck.org for the Republican Debate, which probably reflects the number of candidates and not the amount of obfuscation. Here is the Early Edition and the Late Edition of the fact checked GOP Debate. 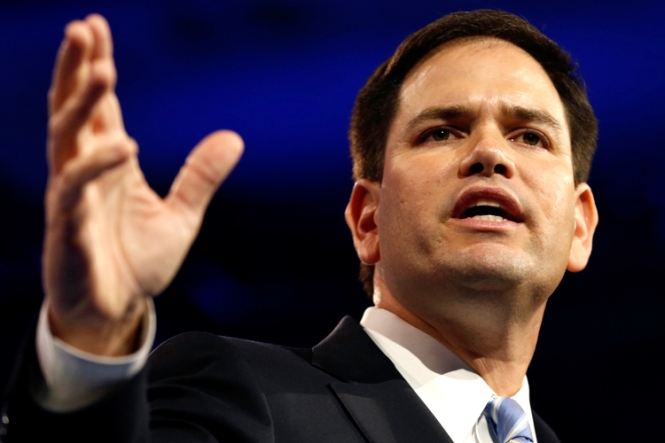 In my previous post I mentioned that a candidate with true vision would make for the best president, but lacking anyone with true vision the Republican Party ought to look to the minority of candidates who are truly presidential in terms of presence and concern for policy details, people who are professional enough to resurrect the legitimacy of the GOP. Of all the men on this stage, these qualifications are most easily seen in Marco Rubio. Keep in mind, my opinions are based on what the candidates brought to the Debate, and not on any amount of research or keen insight into political science.

While it is unfortunately true that Rubio’s rise to prominence has paralleled the party’s need to combat allegations that the GOP is a white men only group and Rubio’s potential to become the first Latino president would be on par with Hillary’s historical first woman presidency, his status as the Republican token minority should not deflect voters from his qualifications. For example, Rubio expertly avoided angering a tough conservative crowd by hinting at some really progressive policies regarding immigration and he was one of the only candidates who attempted to explain complex issues to the audience rather than generate sound bites. A voice who seeks to bring the public up to a higher level of discourse is always going to appeal to me. 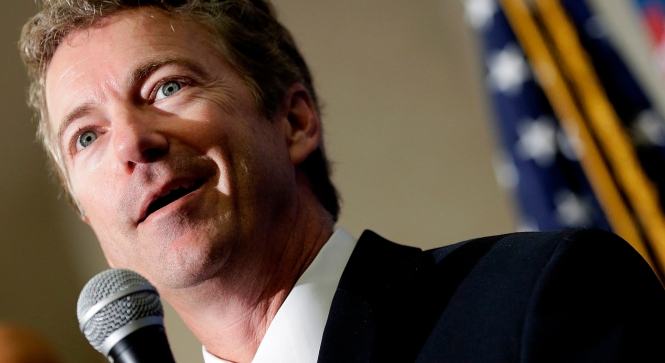 The difference between Rand Paul and the rabble is that people like Trump attack to deflect further examination of their own records, because ultimately people like Trump don’t know what the hell they’re talking about, but Rand has a tendency to hone in on hypocrisy and there is something genuine to the man in this sense. He is engaging the issues at the same time he is attacking the person who opposes him, but this isn’t the reason I took Rand Paul seriously while I tossed the other five out. When Paul speaks it is not from the pulpit of one party or another, and it is this characteristic that makes him one of the most likely candidates to engage in honest and caring bipartisan dialogue. I’ve said it before, but lest we forget, the Independents — (clears throat) THE PEOPLE WHO DECIDE ELECTIONS — like that kind of stuff. (Sorry, had to make sure the rowdy kids in the back heard what I was saying.) 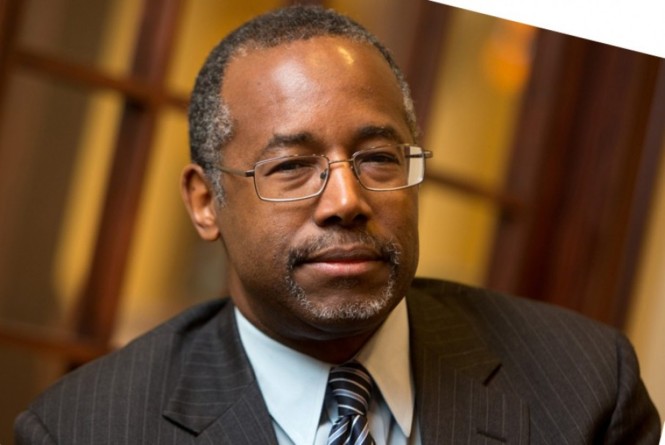 Ben Carson didn’t get a lot of air time, and this won’t make the GOP look any better when it comes to winning over minority voters, but when he did get to talking I heard a lot of words I absolutely did not agree with. That said, as a renowned retired neurosurgeon, he was the one person in the room who had proven that he is intelligent and hard working. I will take that over Donald Trump’s hot air any day of the week.

The most interesting part about Carson’s air time is that Fox News was obsessed with framing his answers with photobombs or Scott Walker nodding. In fact, I was sure that in the two or so months since the debate I would have found a YouTube sensation made from video of Walker nodding in the background to the tune of Justin Timberlake’s “SexyBack” or some similar beat driven song. Alas, this GIF is the best I was able to find:

Maybe Carson actually gets some air time at the next debate, and maybe I’ll see a different side of him when I do. 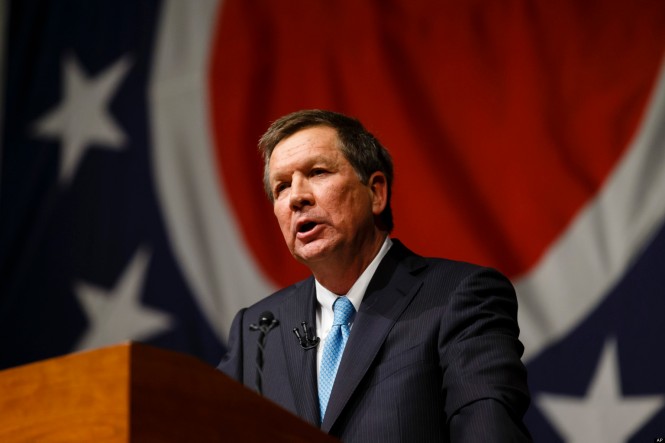 Kasich may not stand a chance. He isn’t exactly the style of candidate the GOP is looking for right now. This is a race for mavericks, and Kasich comes off as more of a working, thinking man. It is likely that he was only added to the roster because he’s the governor of Ohio and the Cleveland crowd present at  the debate seemed to really like him. Like Rubio, Kasich seemed to be concerned with educating viewers on the issues and distanced himself from verbal attacks. I wonder what might have come about if soft-spoken candidates like Kasich were given the mic-time of loudmouth candidates like Donald Trump. In fact, compare Kasich’s participation in a bipartisan balanced budget push during the (Bill) Clinton administration with Trump’s non-cooperative stance and exploitation of corporate bankruptcy to avoid actual financial responsibility issues. Which one of these people do you honestly think would be better at running the country?

(ANSWER: It is not the one who is popular for “speaking his mind.”) 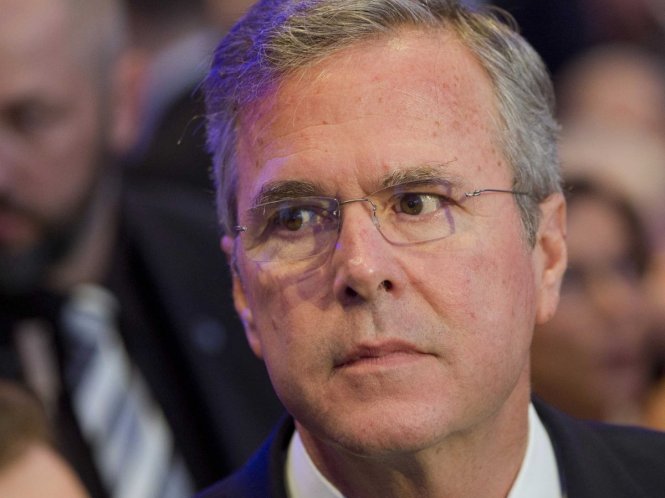 Nobody on either side of the aisle seems to want to associate with yet another Bush, and yet the circus that is the Republican primary crowd makes Jeb look like a real contender.

I’ll be honest. If you showed me the policies of George W. Bush and George H.W. Bush side-by side I would have no idea that they were related. In fact, the “dynasty” argument makes much more sense as a criticism of the bipartisan system than it does as a measure of whether or not Hillary or Jeb are electable candidates.

At the end of the day Jeb Bush, like his fellow Floridian Marco Rubio, just comes off as if he is taking this whole thing seriously rather than attempting to lampoon the party.

I should take this moment to clarify something that many of you who viewed the debate are probably wondering. Why did I get rid of Mike Huckabee and not Rand Paul? Rand Paul is clearly one of the free radicals that is exciting the GOP to a fever pitch, an act among acts in the side show, while Huckabee is careful, thoughtful, and well-spoken. At the same time, I was put off by how everything with Huckabee seemed to come back to his common sense tax policy. This framed him as a travelling apothecary trying to sell the masses on the idea that quinine is a cure for all that ails you. However, just as Martin O’Malley summed up the Democratic Debate, I think Mike Huckabee was the prescient individual who summed up the Republican Debate when he criticized  Hillary Clinton in his closing remarks:

Next up, the Second Republican Debate. No spoilers, people. I haven’t had a chance to watch it yet.