Corey Crawford after the win.  In games 4-6 he had a .976 save percentage and a 0.67 Goals Against. He tied Tony Esposito for the most Playoff wins in Chicago Blackhawks history and has now won two Stanley Cups. He is an elite goalie. No one should think otherwise.

The Best Tradition in Sports.  The Handshake.

Duncan Keith in 23 games played 715 minutes and 37 seconds.  The next highest total?  Tampa Bay’s Victor Hedman with 622:58 in three more games.  The Blackhawks were dominant when he was on the ice.  Unquestionably the Conn Smythe winner for MVP of the playoffs. 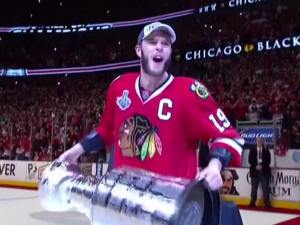 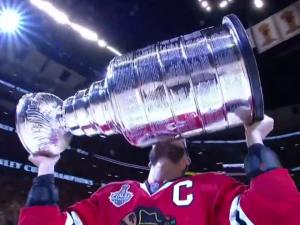 For the third time in six years, the best Captain (and possibly player) in all of hockey lifted the Cup.  Toews (and Kane) will be entering their prime next season.  Despite that, they have already won the Cup three times.  Toews also has two Olympic golds.  They’re 27. 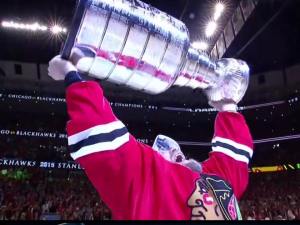 Kimmo Timonen played for a Stanley Cup in 2010.  However his Flyers lost to the Chicago Blackhawks.  He lost last season and much of this season due to blood clots and announced that this season would be his last.  A trade brought him to Chicago and a chance to win a Cup before he ended his career.  After 16 seasons, 1108 regular season games, and 105 playoff games, Kimmo lifts the Cup.  Perfect way to go out.

“I leave this game a champion.” – Kimmo Timonen 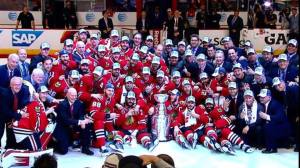