Like fellow The Longest Wind contributor Stephan Mathos, I too had an opportunity to help Justin Tiemeyer in his #ProjectKarmazov quest. While Stephan’s story ended up being a bit of bad luck, mine was more of a missed opportunity and an unfortunate circumstance.

About half of the participants were Red Wings draft picks and signees, and the other half were junior players who were not eligible to be drafted yet, but the Red Wings had their eye on them. So, guys like Dylan Larkin, Dominic Turgeon, Tomas Nosek and coach Mike Babcock’s son Michael Babcock would all be attending the camp. 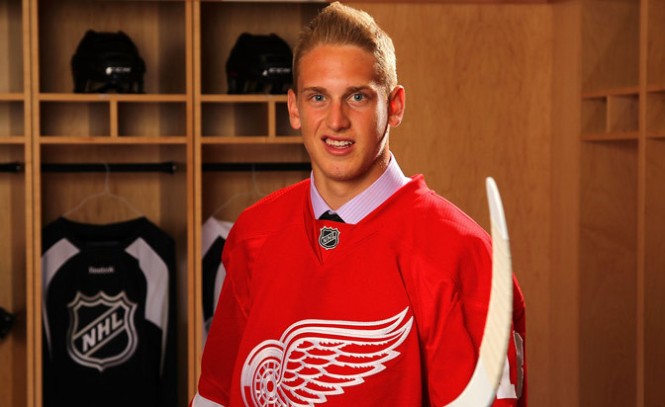 However, the player I was most looking forward to meeting was Anthony Mantha. Anthony absolutely tore it up in one of the Canadian junior leagues this year scoring around a goal-per-game pace. He’s the most highly touted prospect the Red Wings have had in a long time, mostly due to the fact the Red Wings have made the playoffs for the past 23 years and don’t usually get the luxury of high draft picks. The sick thing was Anthony fell all the way to 20th when the Red Wings snagged him in 2013.

But enough of me gushing over the next great Red Wing. After a two-and-a-half hour drive, I arrived in Traverse City early on the Fourth of July excited for the opportunity to speak with future Red Wings. When I told Justin I was covering the development camp and who would be there, he told me this would be a perfect #ProjectKarmazov opportunity. Most die-hard and even some casual fans know who Anthony is, and for those who don’t, they certainly will once he makes it to the NHL.

I told Justin I couldn’t make any promises. I was there, after all, to do an assignment. I wasn’t going to Traverse City on my own accord. I was there representing Michigan Hockey Magazine and needed to act accordingly. I didn’t know what the itinerary of the camp would be — if there was going to be one-on-one time with the players, how many other media members would be there or if Red Wings PR would be watching my every move making sure these kids don’t say anything they aren’t supposed to. I wanted to help Justin, but to make a personal request when I was there to do another job was the unfortunate circumstance I spoke of earlier.

Anthony was in the group of prospects that took to the ice first for drills, so his group would be the first the other media members would talk to afterward. As the players started to file off the ice, we made our way down to the locker room area. Once I entered the locker room, that familiar stench of sweaty pads filled my nostrils, the same it did when I covered my first professional hockey game just two months earlier.

I knew this was not my time to fulfill Justin’s request. Surrounded by other members of the media who also have jobs to do, it was not my place to waste their time asking Anthony to read lines from a book. I finished my interview with Anthony and went on to the next prospect. I promised myself I would make my way back to Anthony under two circumstances 1) He was no longer talking to any other member of the media and 2) I had finished talking to everyone else I wanted to interview.

I remember speaking with Tomas, a recent signee from the Czech Republic. Like many foreign players, his English wasn’t the best, but it was a lot better than my Czech. I remember looking over to where Anthony’s locker was and saw him undressing by himself. No media members, no PR members, nobody.

This was my chance.

I told myself as soon as I was done interviewing Tomas, I would head over to Anthony’s locker and ask him to help my friend. Unfortunately, it was a struggle because Tomas didn’t understand half of what I was asking him.

I finished up my interview with Tomas, and quickly headed over to Anthony’s locker, but he was no longer there. He had either started to shower or had already gone upstairs to begin the off-ice workouts the team had planned for his group. But either way, my opportunity was gone. I would have felt weird asking a PR member to get him for me as I no longer needed him for hockey-related reasons. I had an opportunity, and I missed it.

About a month ago, I had the opportunity to interview another professional athlete in former World Series champion Steve Edlefsen. I didn’t tell Justin about this one until after it happened, and didn’t even think about it when I was interviewing Steve. This one would have worked perfectly, because there were no other members of the media there. I had one-on-one time with Steve, but it completely slipped my mind. I had another opportunity and missed it.